Warning: include(wp-includes/class-wp-term-connect.php) [function.include]: failed to open stream: No such file or directory in /home/content/44/11199644/html/wp-config.php on line 92 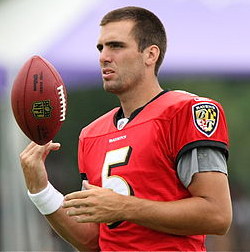 If you are like any one of the nearly 110 million viewers that tuned in for Sunday evening’s Super Bowl, you enjoyed plenty of couch time.  The prediction for the big game:  1.25 billion chicken wings consumed, washed down by 50 million cases of beer.  In just the first 90 minutes, the average viewer is reported to have on-boarded an extra 2,000 calories.  This year’s game wasn’t about the record viewership, but the calories imbibed, which took the definition of couch potato to new highs.

While viewers were competing for the chips and dip, the real action was on the field.  Not the action that you could see and hear through the roar of the crowd (or those raving fans in your living room), but the quiet moments in the huddle where leadership was at its loudest.

Raven’s tight end, Dennis Pita, said it best when describing the confidence that teammates placed in their Super Bowl MVP, “He’s taken a lot of criticism in his career, but we’ve always believed in him.”  Perhaps it is because Joe Flacco’s quiet and unflappable demeanor left many questioning whether he was an NFL best.  His personality could never be described as loud.  In fact, his most winning trait – the one that evokes a trust in his leadership – is his calm and measured voice, even when the chips are down.  This is what Coach John Harbaugh described as “Joe-fire” for the Ravens.

Many have been asked, does he act differently when the team’s behind and it is 3rd down with less than 2 minutes to play.  The answer is a resounding no.  He is a determined leader that respects the capabilities of his team regardless of the circumstances.  Despite being sacked or hit – he never loses his composure.  It is his own strength under pressure upon which he and his fellow players have made the greatest of clutch plays.

Creating an environment of confidence and trust are the fundamentals for being an inspired leader and one who brings out the best in others.  Whether it’s 4th and long or an unforeseen corporate crisis, the steadiness of the hand at the helm drives the purpose and motivations of the team.  In these leaders, there is never a question of the vision, the expected outcome, or the capabilities of the team to achieve it.  It is an intentional leadership style that drives individuals forward with focus, determination, and pride.  And, it is this attitude toward leadership that creates a winning response.

“Joe Cool” leads not by how loud he says it, but by his presence and his actions, upon which the Ravens turned a once questionable season into a world championship year.  Joe’s no couch potato.  He’s now an “elite.”  The question to ask yourself:  are you practicing “Joe leadership” or are you just presiding – enjoying the benefits of the couch?