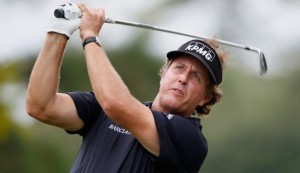 “Phil, Phil, Phil.”  Those were the chants from family rooms across America, including my own, while watching the final round of the 2013 US Open.  This echoed the thousands of fans lining the fairways at the Merion Golf Course cheering on Phil Mickelson, arguably one of the nicest guys on the PGA Tour.  In fact, that afternoon there probably were only 5 people rooting for Justin Rose, the inevitable winner –his wife, 2 children and caddie.

For Phil and his millions of fans the outcome was a disappointing 2nd place finish after leading the tournament for 3 days.  This was his 6th “runner-up” attempt to capture the Open trophy and what he called a “heartbreak” outcome after being “my best chance to win with the way I was playing.”  It was also his 43rd birthday, Father’s Day and he was a top the leader board.  He’d just pitched in a 76 yard shot on the 10th hole for rare Eagle.  A good karma moment that would be dashed a few holes later, leaving him 2 strokes short of victory.  Justin Rose played a brilliant round of 70 with 5 birdies that should have been the talk of the galleries.  Instead it was all about Phil.

What makes a fan favorite?  Or for that matter a revered leader?  Some will say that it is better to be respected than liked.  But it is equally important to be likable.  Together the power of respect and likability is an unmatched combination.  Leaders can be respected for their talent, yet those that also possess genuine character can move mountains.  We want these people to succeed.  In fact, we cheer them on. We believe in them.  We work harder for them.  And, we double down on our commitment to ensure their victory.

Donald Trump may be respected for his power and deal making.  But his ego driven empire and “you’re fired” attitude does not generate good will.  The same is true for Martha Stewart.  Would she really have been pursued by the Feds had she projected a more caring, selfless persona?  Can you see putting Julia Child behind bars?  And how many fans – other than those in Miami – really were hoping for a LeBron NBA repeat?

Likable leaders have a certain authenticity that creates a connection with others.  Yes, we respect Phil’s golf prowess – and the genius and imagination upon which he attacks the game.  Yet we identify with the unassuming father who does what other business travelers might do – catch the red-eye flight to make a 7:30 a.m. meeting (aka tee time) in order to be at his daughter’s 8th grade graduation.  That makes him real.

And, too often, we wish we could really be honest with ourselves about failure. Take Phil, publicly exposing painful errors, moments after defeat.  Holes 13 and 15 “were the two bad shots of the day that I’ll look back on – where I let it go.”  His vulnerability is admirable.  Yet it also speaks volumes of a confidence in self.  There are few that are willing to say, “I screwed up.” Fellow golf pro Hunter Mahan commented after the 2010 US Ryder Cup defeat and Phil’s team contributions, “He’s a great leader, and being in golf, you don’t hear that word often. He’s a great guy to admire.”

Likability creates trusting relationships through selfless actions.  Leaders displaying empathy, compassion and gratitude reveal true character – and garner both respect and likability at the same time.  For professional sports figures, the way to express appreciation is the autographs.  And for Phil, it’s signing every one of them – never racing for the exit, but respecting each fan that has waited with “Sharpie” in hand – no matter the hour.  One of my friends and his 11 year old son, Jack, experienced Phil’s generous spirit at the AT&T National at Congressional Country Club.  They bumped into Phil, heading to his car.  He was visibly tired after the 3rd round of the tournament, but stopped graciously for a short conversation.  Just a few minutes later my friend, realizing that he didn’t get his son an autograph, rushed down to the player’s parking lot.  Phil was in his car and backing up, and there was my friend, Jon, like a stalker, waving a ball cap.  Other pros might have kept on moving.  Phil stopped and rolled down the window.  “It’s for my 11 year old, he’d be crushed without it.”  Taking the Sharpie, Phil laughed, signed away and said, “No problem – any time.”  Now, that’s likable.

Politicians know the power of likability.  Pollsters regularly track favorability ratings as a key indicator to voting outcomes. Rahm Emmanual, Chicago Mayor and former Obama Chief of Staff, once said, “You can’t outsource likability.”  The fact is you simply can’t go far without it.  And once you lose likability as a politician or a leader, it is impossible to recoup.

Respected leaders may succeed for a time based on sheer talent, but likeability is essential for sustained impact.  Respect is foundational, but likability – now that’s inspiring.  In the meantime, Phil’s legions of fans will continue cheering him on and that’s as valuable as any leader board victory.