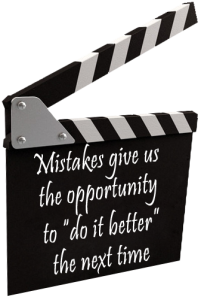 While Hollywood loves its time-travel tales, those of us in the real world—especially the business world—usually believe we’re stuck with our past mistakes. No amount of money can buy that yet-to-be-invented time machine (think “Back to the Future”), and no magical clinch of the fists in a dark closet (as in the recent “About Time”) can transplant us to the moments right before we said or did something we regretted. But that doesn’t mean our longing for a redo must live only in fantasy land.

In business, as in Hollywood, we have the power to yell, “Cut!” We might not be able to undo a scene, but we can do a retake if we act quickly, intelligently and—perhaps hardest of all—humbly.

This applies doubly to companies. Businesses can turnaround. The caveat: a business’s senior leaders have to recognize and admit mistakes. That can be ridiculously difficult, but the payoff is huge. It’s the mistakes in business, as in life, that give us an opportunity not only for a re-take but for game-changing reinvention.

In fact, I’d argue that the more mistakes you, or your business, have made in the past, the better—as long as you identify them and take corrective actions.  Think about it. Would you, or your company, be as successful today without the benefit of lessons that were learned the hard way?

Mistakes give us an opportunity to “do it better” the next time. Unfortunately, many businesses have zero tolerance for errors. They view even the simplest of mistakes as a failure, not as a learning opportunity.

And, as leaders, we are so geared toward achievement that we never give ourselves the permission to examine our mistakes. Most of us would prefer to simply put that gaffe in a box and bury it for all eternity. That in itself is a mistake.

A better course: embrace the miscues. This means taking the time out to assess. What shortcomings did we bring to that last project? What decision led to an underwhelming or botched product launch? What words did we speak—and later have to eat? If we had that Hollywood retake, how would the situation play out differently? Map it out, rehearse it and then capitalize on it for growth.

Flashes of ineptitude sew the seeds for turnaround success. The challenge is getting out of our cultural norms of perfection and fear of risk-taking to recognize that missteps—small or large—can create great businesses and exceptional leaders.

Consider the simple mistake that John Pemberton made. One afternoon in May 1886, Pemberton accidentally added carbonated water to his headache elixir. That “oops” moment led him to reinvent his concoction to compete with the popular fountain drinks of the day—ginger ale and root beer. Time-travel to today: Coca-Cola is selling its drinks in 155 countries thanks to Pemberton’s “goof.”

That foundational mistake was minor compared to one the company committed 99 years later in April 1985. The cola wars had raged for decades. Coke had been losing to rival Pepsi for 15 years when Coca-Cola CEO Roberto Goizueta, recognizing that consumer preferences were changing, decided to introduce the first change in the beverage’s super-secret formula since John Pemberton’s era.  His goal: take the market by storm with a new Coke.

Instead, he created a perfect storm for the company. Although New Coke had been successfully tested with 200,000+ consumers, the company erred by not recognizing the emotional connection that Coke had with its market. Soon consumers were hoarding cases of “original” Coke, forming protest groups, and flooding company headquarters with plaintive phone calls. Goizueta even received a letter addressed to “Chief Dodo.”

New Coke was a colossal mistake. Admitting the error would be a public embarrassment. Yet 79 days later, New Coke was canned (no pun intended). The “real thing” was reintroduced as Coca-Cola Classic. That day, the rebranded Coke headlined all three nightly newscasts and was on the front page of every major newspaper. Take that, Pepsi.

In some instances, being at rock-bottom can be the greatest inflection point for a business. And, rethinking even the best-laid plans can create extraordinary leaders. Goizueta, who had been dubbed one of the “dumbest executives in America” for the New Coke debacle, turned out to be one of the most brilliant. He passed away in 1997, but the “redo” he had engineered dramatically turned around the future of the company.

Today, the Coca-Cola Classic logo is recognized by 94 percent of the world’s population. Its growth continues unabated. And its market share stands at 42 percent, with Pepsi trailing at 31.

You and your business don’t need a time machine or even a Hollywood retake to go back and fix something. Give yourself another chance. Mistakes, after all, are opportunities to get it right the next time. You might be surprised by the results.