Warning: include(wp-includes/class-wp-term-connect.php) [function.include]: failed to open stream: No such file or directory in /home/content/44/11199644/html/wp-config.php on line 92

Warning: include() [function.include]: Failed opening 'wp-includes/class-wp-term-connect.php' for inclusion (include_path='.:/usr/local/php5/lib/php') in /home/content/44/11199644/html/wp-config.php on line 92
 Pope Benedict Resigns - Too Blessed to be Stressed 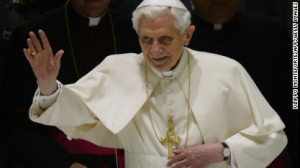 The news from the Vactican: a stunning letter of resignation – with 17 days notice from the Holy Father himself. The historic proportions of the Pope’s very personal decision are evident. Not since Gregory the XII has a sitting Pontiff chosen to leave his post. And, for those of you counting, that’s 598 years – of course, if you’re not including Pope Saint Celestine V in 1294. Pope Benedict’s announcement traveled the world with 1.2 billion Catholic followers collectively sharing voices of surprise and concern for the future of the faith. Yet, from an outsiders view – and as a good Presbyterian, permit me to say, ‘Fear not the Church is in good hands.’ Here’s why.

Pope Benedict made a courageous decision. His very words, spoken with humility and purpose, represented who he is – not just a spiritual leader but first and foremost, the caretaker of a beloved institution. Stop for a moment and think how many corporate executives you know possess the same selflessness to make an unprecedented choice to forgo a position they love.

Certainly staying too long has a tattered past. Egos, the trappings of authority or perhaps the fear of an unknown future can cloud judgment – whether in business, charitable or public service. The outcome is that notable and respected leaders have left organizations with legacies tarnished, as personal ambitions have failed to yield to the good of the whole. In some cases, they themselves have become bigger than the entity itself, leaving organizational dysfunction and faulty decisions in their wake. And, this is not to mention the shareholders and employees who have stood by while respected institutions have spiraled in a downward trajectory.

Pope Benedict was said not to have sought the role of Pontiff, but assumed the mantle to shoulder enormous responsibilities amidst difficult issues of the faith. Certainly the Pope has his critics – as all leaders do, but whether you agree with his positions or not, there is no mistake that he lived out his personal faith in a way that was visible in both word and deed. The choice of resignation was no exception. His final gift of service was to make a decision not for himself but for that of the Church. Imagine corporate America, if we all had the same personal reflection, courage and selfless character.

As the papal conclave of 120 Cardinals gathers in Rome to select a spiritual leader that can uphold the competing needs of a worldwide flock, members of the faith can confidently anticipate a wise choice with the first white puffs of smoke from the Sistine Chapel. Why – because in the secular-sense, the Church’s succession plan is one that even the best of Corporate Boards can admire. With Cardinal-electors having been mentored in service and assigned to posts to build intellect, judgment and experience it is a good bet that the next Pope will bring the requisite servant leadership to sustain the Church for years to come.