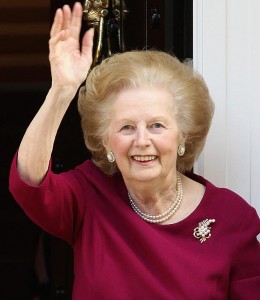 There have been many articles penned about Margaret Thatcher over the past few days, lauding her accomplishments and contributions to Britain and the world. But, if you read between the lines, you’ll find a common connecting theme — the impact of a woman leader during the most difficult of times. Hers is a fascinating story of doctrine and conviction, grace under pressure and unwavering confidence.

She led from the heart and embodied an ideological world view that shaped every decision she made. Her “Thatcherism” was rooted in her belief about the kind of leadership needed to save her country from economic collapse and preserve the freedoms she saw as fundamental to the British people. During years of immense challenge, she served as both captain and rudder, steering and steadying the ship of state on the course she saw as vital to the good of the whole.  She saw through the smoke of internal conflict to what she believed to be the essential greatness of Great Britain: “There is no such thing as society,” she famously said. “There are individual men and women, and there are families.”

Certainly, her “lead from the heart” approach created fast friends and fierce foes. About as many people loved her as hated her for her decisions and policies. Still, she had the courage not to be liked, but rather to be respected in what she thought was right. Her “Iron Lady” persona nonetheless had a gracious side that left an indelible impression on those who experienced it.

A friend recently recalled an encounter between a Cuban-American gentleman and the then 84-year-old Lady Thatcher, while attending a London reception in 2010. He offered to find a place for her to sit and she was delighted. As she held on to his hand, he told her he was born in Cuba and the people of Cuba loved her and admired her for all she did to help free the world. She then said to him in a very firm voice, “The people of Cuba shall also be free,” and then she put her other hand on top of his. His eyes welled up with tears, as did those of everyone watching. Her life was filled with such encounters — direct and personal and unwavering in conviction.

Thatcher listened intently to others. She respected and recorded insights from people across the spectrum, which helped define her own philosophy and thinking — some she would agree with others vehemently not.  Welcoming then-Soviet leader Mikhail Gorbachev to London, she extended a hand and said, “To make sure there is no misunderstanding between us – I hate Communism.” Still she would use her shrewd insights to guide nations. Colin Powell has observed that Thatcher’s measure of Gorbachev gave the U.S. encouragement about the prospects of dealing with the Kremlin. “I like Mr. Gorbachev. We can do business together,” Thatcher said.

While she could indeed be rigid in her thinking, she never lost her love of learning, a love built through the scholarships she earned from high school all the way to Oxford University.  She was not haughty about the sources of that learning during her career and even afterward.   She had a habit of asking anyone she met from abroad, “What’s the situation in your country?” And no matter whom she might be talking with, she would always inquire, “What are you working on?” It was those conversations that might lead her to reach into her purse to grab an ever present notepad to jot down ideas of particular note.

As a woman leader, the Iron Lady not only leaned in, she leaned forward. Known to work 16-hour days, penning her speeches in the wee hours of the morning, she showed that there is great strength in running toward conflict rather than from it, remaining strong and confident despite withering criticism.

She likewise showed the power of integrity, eschewing compromise when principle was at stake. Her ability to remain true to herself changed the face of her nation and our world for decades to come — and revealed bedrock leadership secrets for anyone tough enough to sacrifice popularity for courageous resolve.